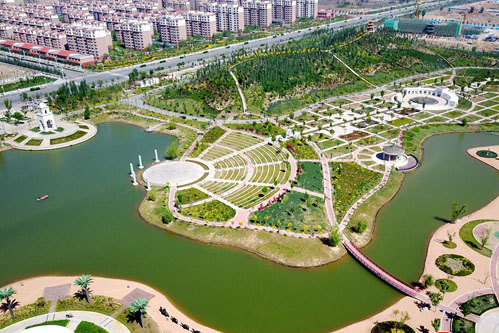 Yongning county is in the southern part of Yinchuan city, the capital of Ningxia. It is located in the middle of the Yellow River irrigation area of the Yinchuan Plain with an administrative area of 934 square kilometers.

Yongning has jurisdiction over five towns, one township and one sub-district office, with a total population of 321,600. In recent years, it has won a number of honors, such as the national garden county, the national modern agricultural demonstration zone, and the first batch of ecological civilization demonstration zones in China. It was a nominee of county-level civilized cities.

Yongning has excellent natural conditions. It borders the Yellow River to the east and Helan Mountain to the west, and is rich in wheat, rice and fruits. It is a famous crop-producing area and one of the 500 commodity grain base counties in China.

The county has successfully established an agricultural high-tech industrial zone in the autonomous region, and the Ningxia National Open Development Comprehensive Pilot Zone for the Grape and Wine Industry has settled in Minning Town.

Yongning has geographical advantages. The county has convenient transportation, only 20 kilometers away from Yinchuan city. The Xi'an-Yinchuan high-speed railway, the National Highway 109, and the Beijing-Tibet Expressway run through the city. The Yellow River Bridge has been completed and opened to traffic, thus constructing a complete transportation system.

Yongning's industrial system has distinctive features. It relies on the Yongning Industrial Park focusing on biopharmaceuticals, machining and new materials.  Yongning has been rated as a national circular economy demonstration county.

Yongning also prioritized implementation of endowment insurance for land-expropriated farmers, paying for their hospitalization and their diagnosis and treatment. It integrated county and village medical services and free education for high schools, and was rated as the first batch of model counties for improving people's livelihood in China.