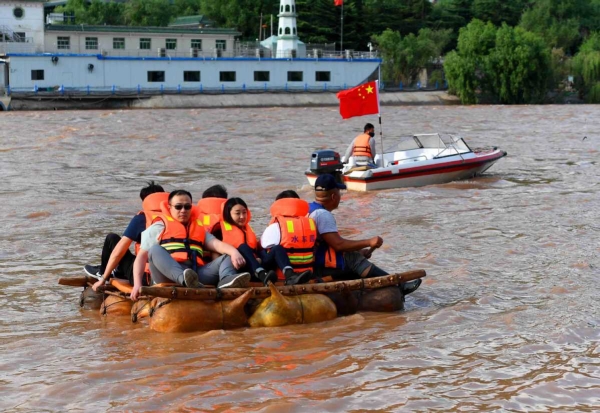 YINCHUAN - Drifting down the Yellow River on a sheepskin raft while listening to traditional songs from northwestern China -- it's just a regular day out at the Shapotou Resort in the city of Zhongwei, Ningxia Hui autonomous region.

For 2,000 years, sheepskin rafts have been used to transport goods on the river. Now they carry tourists, drawn to the novel sensation of flowing with the current aboard a vessel from a bygone age.

But it is not just the tourists who benefit. The raft rides bring valuable income to local people who have turned their efforts to the tourist trade. At the same time, the practice serves to preserve the ancient craft of raft-building, which is an important item of intangible cultural heritage.

According to Zhou Denan, an inheritor of the sheepskin raft-making craft in Zhongwei, the process of construction is far from simple, involving a wide range of manual skills.

"One must first carefully choose a good sheep to sacrifice, skin it, let the skin ferment and finally soak it with oil and leave it to dry in the open air. This process can take at least two weeks to finish," said Zhou.

Once the skin has been formed into a leather bag, it must be filled with air, creating a balloon that floats on the water. The craftsman then inflates the bag by blowing air from his lungs, a task requiring both skill and strength.

"When we 'breathe' the skin, we must know how to coordinate our hands and mouth," said Zhou. "We open the cut in the sheepskin, form an 'O' shape with our mouths and begin to breathe air into the sheepskin. After this has been completed, we fix the opening. We breathe air into the skin with all the force of our lungs, while simultaneously allowing natural wind to blow into it."

The building of sheepskin rafts was listed as a key item of intangible heritage in Ningxia in 2009.

At the Shapotou Resort, a team of rafters serves the tourists with a total of 80 vessels. During the high season, from April to October, they ferry approximately 400,000 tourists.

In the 1980s, Zhongwei began to develop the desert and Yellow River tourism resources in Shapotou, seeking to introduce sheepskin rafts as a tourism-experience project. The project started with about 20 rafts, later growing to more than 100 at the peak before the epidemic. They brought in extra revenue, while injecting cultural elements into the development of local tourism.

He Taizhu, executive of the aquatic events department at the Shapotou Resort, said that, to enhance the tourists' experience on the river, they reduced the number of tourists per raft from eight to four, and invited the raft workers to sing folk songs for them.

Among those earning a wage from rafting is 47-year-old Chen Tianli. He became a regular employee at the scenic spot from his second year there, gaining popularity due to the quality of his singing.

Singing helps to enhance the tourists' enjoyment, he says, while giving the rafters some extra energy.

"There's a market here, and there are many people willing to learn," he said.