Since the beginning of this year, Jinfeng district of Yinchuan, capital of the Ningxia Hui autonomous region has been planning its industrial blueprint, focusing on increasing farmers' income by implementing the rural revitalization policy. 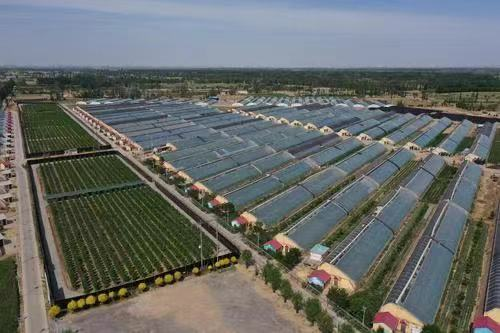 An aerial view of the vegetable garden in Jinfeng district, Yinchuan city. [Photo/YCEN.com.cn]

To develop the agricultural industry facility and improve the infrastructure of the Runfeng village industrial park, it built 18 solar greenhouses, more than 1,000 square meters of supporting storage and cold chain, and 400 meters of road in the industrial park, one production bridge and three mechanical well.

At the same time, it gave full play to the advantages of mentors to lead villagers to participate in facility agricultural planting. In particular, the subsidies of over 500,000 yuan in total, including seedlings, labor subsidies and loans with discounted interest, stimulated the enthusiasm of villagers. More than 10 households became new greenhouse renters in the industrial park to grow seasonal fruits and vegetables.

Currently, tomatoes and watermelons are ready for sale. While promoting villagers to increase their incomes, it further enhances the operation of the village collective economy and broadens the employment channels for residents.

In the grape greenhouse at the modern agriculture demonstration park of Yuanzi village, resident Lu Yong is in the middle of controlling the temperature and budding of the grapes, preparing for the grapes to come into season at the end of May.

Liangtian town, relying on agricultural resources, infrastructure and location advantages, has focused on the characteristic industries in recent years to meet the needs of developing modern agricultural and rural industries. It has built five base markets, six cold storage and supporting facilities and equipment, such as sorting, processing, packaging, cold chain, and logistics distribution.

"Based on the sandy land resources of Liangtian town, we have gradually built a batch of standardized demonstration parks like high-standard intelligent seedling bases and the strawberry town. In the next step, we will continue to work hard on standardized industrial parks and focus on improving agriculture and expanding the characteristic industries. We will strengthen brands to further promote the model of 'agriculture plus' and the development of agricultural clusters", said Hai Rui, member of the Party Committee and Organization Committee of Liangtian town in Jinfeng.

Jinfeng insists on developing characteristic industries mainly based on facility agriculture, and raises funds of 16.3 million yuan. About 27 agricultural facility parks such as Jinglong Village Smart Agriculture Demonstration Park and Jinxing Village Modern Agricultural Science and Technology Poverty Alleviation Industrial Park have been built. Some 5,868 facility greenhouses have been constructed, with a total area of 13,500 mu (900 hectares) and an annual output of 147,000 tons of fruits and vegetables with an output value of 438 million yuan.

In 2021, the per capita disposable income of rural residents in the region reached 16,138.5 yuan with a growth rate of 10.5 percent year-on-year.